Research conducted at the Cleveland Clinic showed a 35% reduction in PD symptoms by the simple act of pedaling a bicycle at a rapid pace, optimally 80-90 revolutions per minute. This research inspired the launching of Pedaling for Parkinson’s™ (PFP), an indoor cycling program geared specifically towards individuals with Parkinson’s disease.

Participants will either ride on a solo stationary bike or on a tandem bike with a volunteer “pilot” three times a week. Each one hour exercise session consists of a 10 minute warm-up, up to a 40 minute main exercise set, and a 10 minute cool-down. Rest breaks will be taken as needed. Participants will ride within their pre-determined heart rate zones and will be closely monitored by program facilitators. You can download a program brochure here. 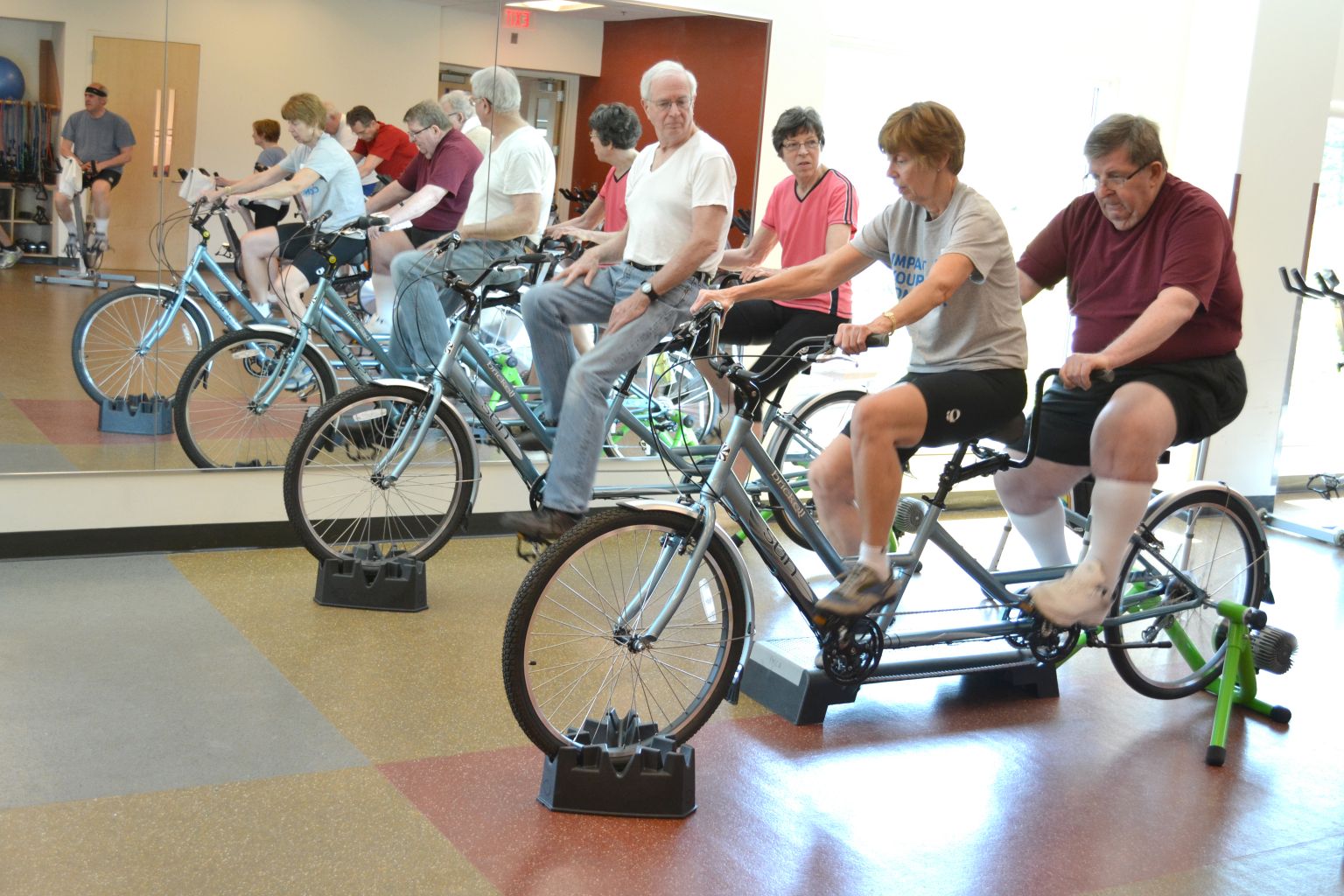 All participants must receive medical clearance to participate and have an individual orientation with the Pedaling for Parkinson’s Coordinator. Contact Taylor Medina at tmedina@annarborymca.org or 734-661-8007 if you have any questions.

Screened, approved participants may register at this link.

In 2003, Jay Alberts, Ph.D. was doing research on Deep Brain Stimulation for PD patients. An avid cyclist who grew up in Iowa, Dr. Alberts convinced six cycling friends to join him for the Register’s Annual Great Bicycle Ride Across Iowa (RAGBRAI). One friend was accompanied by his wife who has PD. The couple started on the week long tour on a tandem bike. It was an instant disaster. Dr. Alberts took his friend’s place on the front of the bike, pedaling at his typical 80-90 rpm cadence. After a few days, the woman said she no longer felt as though she had PD. Also, her handwriting, impaired by PD, was markedly improved.

His curiosity piqued, Dr. Alberts researched the effects of fast-paced cycling on 12 PD patents. Six rode on solo stationary bikes at their normal cadence of about 55 rpm, keeping their heart rates at 60-85 percent of maximum. Six rode on the backs of tandem cycles at a pace of 80-90 rpm within the same heart rate range. For eight weeks, each rode three hourly sessions per week with 10 minutes of warm up, 40 minutes at cadence and 10 minutes of cool down. At the end of eight weeks, the patients on solo bikes had no measurable change in PD. Those on tandems had an average of 35 percent reduction in symptoms. A month after stopping, the tandem patients still retained some benefits.

Dr. Alberts is conducting additional research to expand the size of the study groups and to explore certain aspects of the cycling protocols. He has published several scientific papers on his research. Based on this groundbreaking research, many people with PD are cycling either on solo bikes or on tandems, achieving relief from symptoms as long as they maintain the protocols, especially the target cadence.